This Corporate Governance Statement has been made according to recommendation 54 and the applicable legislation. This Statement is made separately from the Report by the Board. The Board´s Audit and Finance Committee and the Company´s auditor have reviewed this Statement.
The statutory governing bodies of the Company are the Shareholders´ meeting, Board of Directors, Chief Executive Officer and the Auditor. Other group management and the below described business segments´ management support the statutory governing bodies of the Company. The Company´s domicile is Oulu.

The operative business of Elektrobit Group takes place in business segments (sub-groups) formed branch-by-branch. The external reporting of the Group is also based on these business segments which are the Automotive Business Segment and the Wireless Business Segment. The Presidents of the sub-group´s parent companies report the segment business to the Board of Directors of each sub-group´s parent company (“Segment Board´). Segment Boards comprise the Company´s CEO as the Chairman, and one or more Board members of the Company and possibly also one or more external expert members. Segment Board members are elected based on preparation of the Company´s Board. Operative business decisions are made in each Business Segment. The Company´s Corporate Governance Code and this Corporate Governance Statement are publicly available at the Company´s website at www.elektrobit.com. 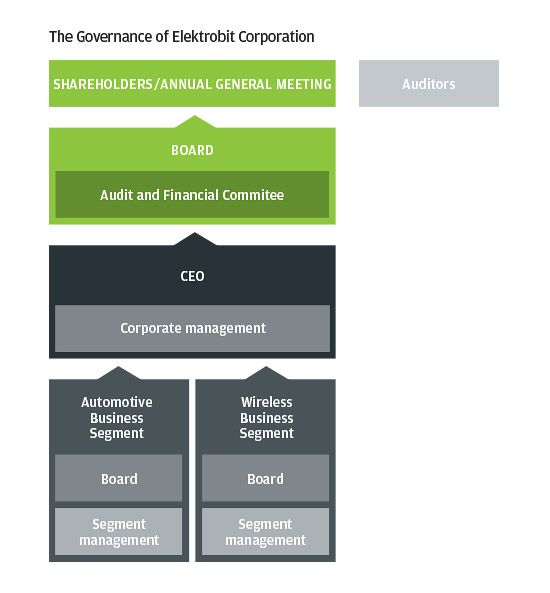